I've a Feeling We're Not in Kansas Anymore

As I boarded my flight in Moscow, I could not believe that the moment had finally come, I’d been planning this trip for so long that it was difficult to really remember how it all stared! My mother has labeled me a risk taker and insisted I not go, friends in Russia had warned me against visiting, my doctor was speechless when I told her my plans……asking in a rather soft and shocked voice……”why”???? My answer was “why not, I love off the beaten path places”. In only two hours, what seemed like a far off distant place would soon become reality. The plane took a right turn and started to descend over the water. After nearly a year of planning, this dream that once felt soooo distant and far-fetched would soon come to fruition. 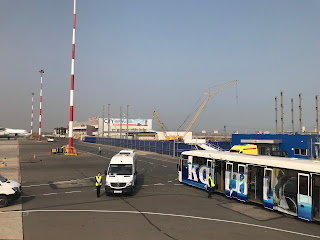 At last our Boeing 737 was on the ground! I had arrived…..arrived in a place that I had heard so much about on the news, a place that had a very nasty reputation for ethnic violence and war and a place that is not exactly on the beaten tourist path. This place? Makhachkala, Dagestan in Russia’s North Caucasus. Makhachkala was the first stop on an individual tour that would take me from The Caspian Sea eventually to The Black Sea in Sochi with many stops in between. One of these stops would include the infamous republic of Chechnya, which suffered through two horrific wars during the 90s and early 2000s. But, that’s for later. For the time being I was focused solely on Dagestan.

The stewardesses opened the door to the runway and I descended the stairs to the tarmac. After being in St. Petersburg and Moscow for two weeks where it was cold, rainy and rather dreary, it was a bit of a shock to the system to suddenly be in a climate where it was sunny, dry and mild. On the tarmac sat three vehicles, a bus (to take passengers to the terminal), and two vans. I rushed to the bus to get a good seat, knowing soon there would be a crush of people and it was important to be in a place where I would not be boxed in like a sardine. But suddenly I was told that since I had flown business class that I did not have to ride the bus the 100 so meters to the terminal, that I was entitled to ride in a private van. So, I exited from the bus to the van.

When I got to the van there were plenty of open places. Just as I was about to get into the van and take my place, some guys in three piece suits asked me in Russian if I was in business?? I said yes. They then told me to go to the next van. What, I thought! Why if I flew business was I told to get into another van? Whatever, I just need to get to the terminal. However, it seemed a bit petty of them not to let me ride in their van. I suddenly had visions of my middle school days when I was not allowed to ride in the back of the bus since that was where all the “cool, cliquish” kids rode and I was not a part of that circle. But whatever got me those 100 so meters to the terminal was fine by me, it was not exactly a three hour or even three-minute ride. 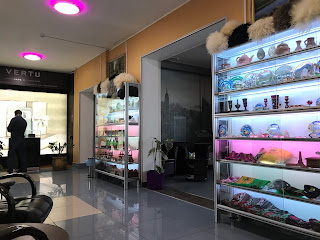 I arrived at the terminal and exited the van to find a metal detector at the door. I quickly threw my backpack onto the belt and walked through the metal detector without any trouble. But the terminal I had exited into was not what I had expected. It was as if I was in some type of airline lounge, with big couches and easy chairs scattered throughout the lounge with people sitting around drinking tea and chatting. It struck me as odd that there was no baggage claim or anything that remotely looked like a regular airline terminal. But, I figured that we somehow must pick up our bags outside. As I got close to the exit to the street, I noticed another metal detector and airport officials checking passports and tickets. I had not left Russia, but knew that this was the North Caucasus, so of course things were likely a bit different than back in Moscow or Petersburg. I reached for my passport and just as I was about to show the officials, they waived me through saying I was a foreigner and could go right through the metal detector. I left the building onto the sidewalk, still perplexed to where I had been. 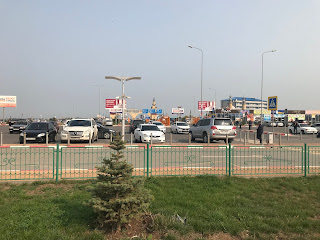 I was a bit surprised when I left and there was absolutely nothing there! No, baggage claim or truck with bags, just a sidewalk and parking lot. I searched for my guide who was supposed to meet me at the airport, but no sign of anyone remotely close to him. I walked toward the regular terminal building and still no baggage claim or guide. I was still pretty calm, but started to worry a bit. I wandered around for about five minutes trying to find something that resembled baggage claim or my guide, but alas….nothing! Finally, I saw a man from my flight and asked him in Russian where we picked up the bags. He told me I needed to go back to the building I had left from.

So, I walked back to the building and luckily found my boarding pass and baggage claim sticker, which I would need in order to get back into the building. I showed them my boarding pass and baggage claim and they told me to take a seat in the lounge and wait for my driver. But what about my bag I asked in a rather worried voice. They told me to simply wait for my driver. At this point my concern level was going up quickly to mild panic. Where was my bag??? And, where was my driver??? I sat down and searched for the phone number of the tour director, Evgeniya. I sent off an angry message to her in English (my Russian had shut down at this point) asking just where the hell my driver was and why I hadn’t been met at the airport.

I waited a few minutes and nothing, radio silence! I figured at that point I should call her. I hurriedly dialed her number only to get a message that the user was not available at this time. I was a bit perplexed as I had a mobile plan that allowed me to make nationwide calls, so this should not have been an issue. I then figured I would call the tour agency she works for and who organized my tour. I told them I was a client of Evgeniya’s. Unfortunately, they had no answer for my situation, leaving me with no other option but to wait and hope my bag somehow showed up.

After about 15-20 minutes of sitting around worried, I noticed people’s bags being delivered. It finally dawned on me that this place was the business arrival hall where you waited until your bag is personally brought to you. This calmed my nerves a lot knowing that my bag would eventually show up. Just then I got a text message saying the user was back online and within a few moments I received a message from Evgeniya apologizing for the confusion. Just then my driver/guide Gadzhimurad called me apologizing for the confusion asking me where I was. I tried to explain but it was a bit tough to pinpoint exactly where I was. He eventually understood and said he’d wait for me outside. And just as we hung up an airport employee showed up with my bag! I was overjoyed to see my beloved crimson red and black bag and thanked them!!

I exited the terminal bag in hand and looked around and saw a guy waiting outside. Within a few moments he found me and asked me if I was Steve. I said yes. He took my bag and we went to his car. He knew I had come from Moscow, not only because of the information I provided to the tour organizer, but the fact I was carrying both my heavy sweatshirt and coat. I guess since the temperature was near about 18°C or about 67°F it was a dead giveaway that it was indeed me. 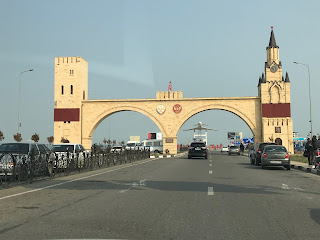 The drive into town would be about a half hour. At first the scenery reminded me of somewhere out of Arizona or California desert with empty, desert like scenery and roads. But as we came nearer to the city, the desert like conditions gave way to a large city with blocks of flats and full of chaotic traffic!! The streets of Makhachkala were absolutely INSANE!! Cars zig zagging in and out of traffic, people bolting, across the road in front of cars narrowly missing being hit, drivers making video calls on their phones and one guy who was working his way between cars in a rather primitive wheelchair. I had been to India where mass chaos on the roads is just a fact of daily life with cars moving in and out of traffic and avoiding giant cows and monkeys that wander the city streets, so I had seen some pretty chaotic scenes. However, Dagestan really gave India a run for its money in terms of road chaos. My driver Gadzhimurad made his way through traffic like a pro, never flinching, not giving an inch to other drivers, all while giving me an in-depth narration of Makhachkala and Dagestan. 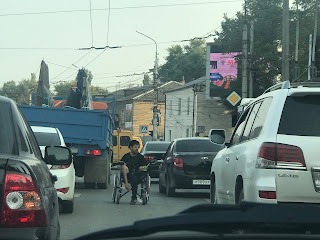 Finally, after what felt like a crazy war of cars on the streets of Dagestan we arrived at my hotel. But it did not look like your usual hotel. There was no sign in front, no parking lot, no nothing. We walked into the building and there was no lobby, just stairs and an elevator with a sign board of the businesses in the building. There had to be a mistake, where was the hotel I thought? But then it dawned on me….in Russia they have such things as mini-hotels, hotels within a building that only take up several floors and not the entire building. We eventually got to the 11th floor and off to the left was an office. This office turned out to be the “lobby”. I walked in with my guide and gave them my passport for registration. They gave me my key and told me I was on the 9th floor. So, down I went in the elevator and behind a large wooden door was a hallway with rooms. I entered my room and it was stunning!! A giant living room, beautiful bedroom and two bathrooms!! After about 12 hours of travel from St. Petersburg, it was good to be in a comfortable place, if only for a few hours before our city tour. As I made myself at home, unpacking my things and laying down for a quick nap, I started to think about just where I was. The famous words from the protagonist, Dorothy, from the world-famous film, "The Wizard of Oz" came to mind when she said to her dog, “Toto, I've a feeling we're not in Kansas anymore.” In other words, I was in a whole another world!!